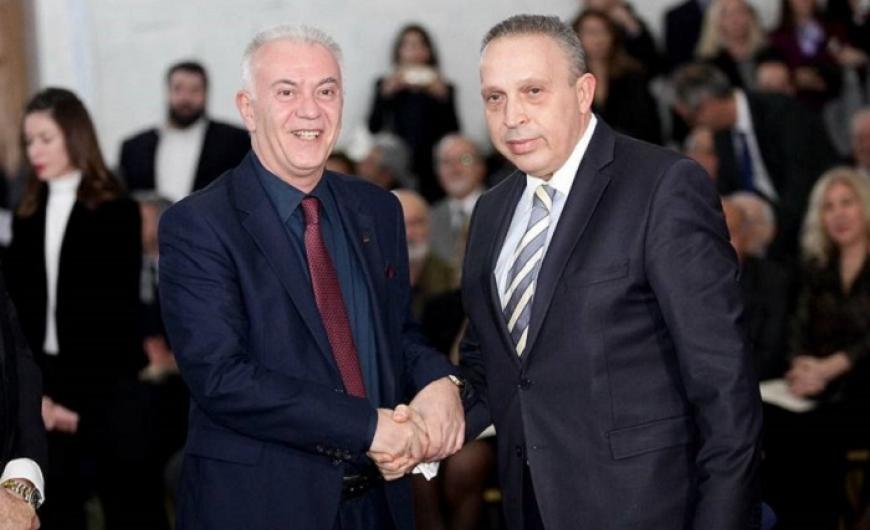 Significant recognition for Direction’s publisher at the 34th award ceremony of the “Athanasios V. Botsis” Foundation for the Promotion of Journalism

The 34th award ceremony of the “Athanasios V. Botsis” Foundation for the Promotion of Journalism took place in the presence of the political leaders, politicians and Mr Pavlos Pavlopoulos, President of the Hellenic Republic, at the Old Parliament House on Wednesday 17 January 2018. Inter alia, the ceremony also included the “Vlassis Sokratidis” award which was instituted in 2013 in memory of the late Vlassis Sokratidis, President of the Hellenic Union of Editors of Periodical Press (HUEPP).

Mr Michael Savvakis, President of the HUEPP, presented the award to Mr Vangelis Papalios, Union Member and Publisher of Direction for his long journalistic-publishing journey, his pluralistic articles and his significant social and political activity

Vangelis Papalios celebrates 34 years in the publishing field. His career began at COMPUPRESS SA in 1984 and in 1985 he became head of the editions “Computer for all “ and “Pixel”.

He founded DIRECTION in 1993 and DIRECTION BUSINESS NETWORK was created in 2014 with the arrival of the second generation corporate structure.

The company also organises extremely important awards for the Greek business world such as the “RETAILBUSINESS AWARDS”, the Protagonists of the Greek Economy and the HAIR AWARDS, while it recently undertook the international institution PRODUCT OF THE YEAR.

He is married to Penelope Chatzidimitriou and is the father of three, Konstantinos, Giorgos, and Natassa.

Product of the Year: Direction to represent the institution in Greece